Monitoring activities in the Italo Maltese protected areas planned in WP3 have been carried out all the partners in order to assess any changes in the seabed integrity and the presence of non-indigenous species. The protected habitats being monitored campaigns are the Posidonia oceanica meadows (habitat 1120), the biogenic Dendropoma petraeum reefs (habitat 1170) and maërl seabeds (habitat H1110 in the Italian water, and RAC/SPA Habitat Code III.3.2.2 in the maltese water)

Monitoring the maërl seabeds (habitat H1110 in the Italian water, and RAC/SPA Habitat Code III.3.2.2 in the maltese water

Maërl beds are habitats characterised by the accumulation of thalli belonging mainly to red calcareous algae (Rhodophytes) on a sandy substrate. They are characterised by high biodiversity indices, and they represent an ideal substrate for the settlement of many invertebrate species and sessile organisms. They also provide refuge for fish species of high economic interest. They are described as non-renewable habitats because of their very slow growth rate, making them sensitive to pressures such as maritime traffic, fishing activity, bad water quality and the presence of non-indigenous invasive species. Monitoring of maërl beds has been carried out in the Pelagic Islands AMP (EUAP0553) and in the SIC Fondali dell’isola di Capo Passero (ITA090028) for Italy and in the SIC Baħar bejn il-Ponta ta’ San Dimitri u l-Qaliet (MT101) for Malta. 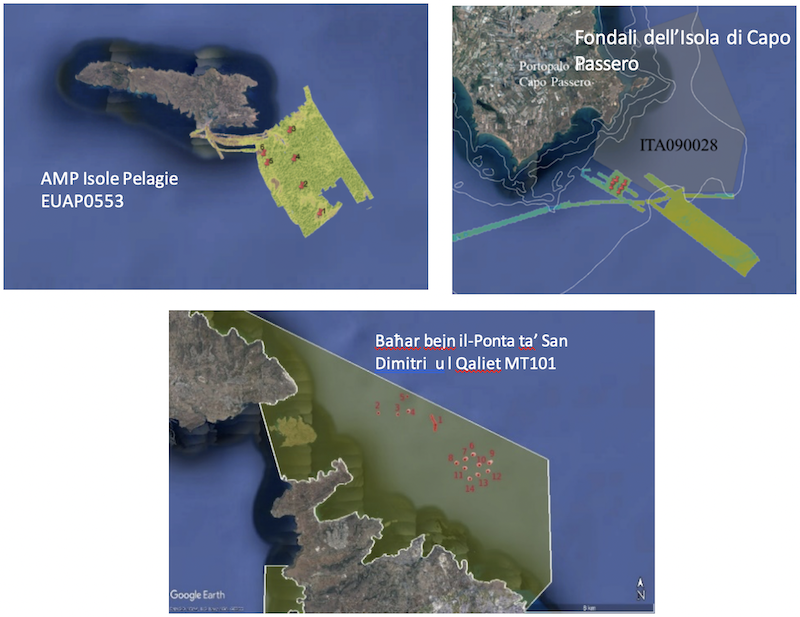 The presence, extension and vitality of maërl habitats were monitored using multibeam backscatter analysis in order to detect its morphobathymetric characteristics and through video/image analysis to establish the integrity of the beds. Furthermore, the associated macrozoobenthic communities will be studied by analysing bucket samples. In the Pelagic Islands Marine Protected Area, an extensive rhodolithic seabed was identified in the south-eastern area of the island of Lampedusa (about 2580 hectares monitored). In the area of Capo Passero (1170 hectares) no maerl/rhodolithic bed was identified. However, in some sediment samples from Capo Passero, fragments of calcareous algae were found, although negligible. However, it was decided to monitor an area close to the SCI in order to characterise them. Video and image analysis as well as macrozoobenthics and macrophyte sample analyzes are in progress.

The University of Malta, using ROV (Remote Operated Vehicle) within the local Marine Protected Area, off the north-eastern coast of Malta, updated the existing coralligenous distribution maps and in particular maerl seabed, assessing its habitat density and ecological status. In the coming months, the University of Malta will also carry out other surveys for the study of macrobenthonic community in order to identify the major structuring species and to assess the putative impact of Non-Indigenous Species (NIS) on the same assemblages. 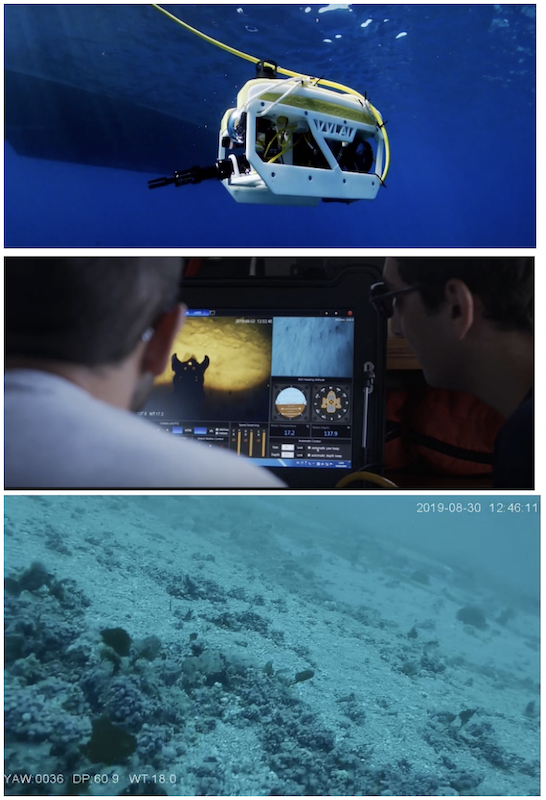 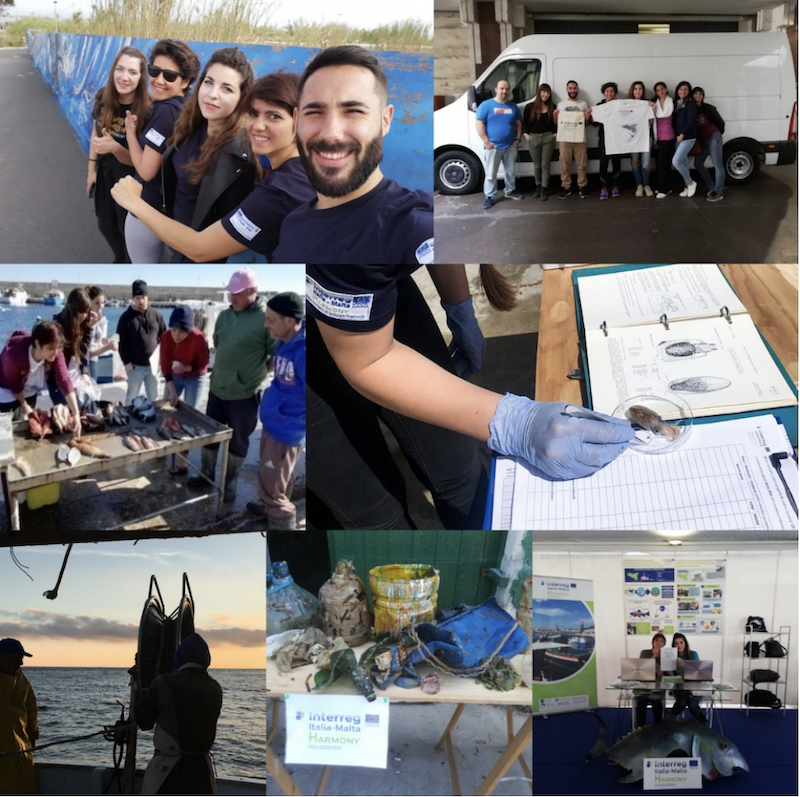 Study of the sand banks or seabeds var. a maërl (habitat H1110) included monitoring of fishes and benthic communities (mega benthos) in Portopalo di Capo Passero (SIC, ITA090028) conducted on board of professional fishing boats in spring 2019. The activity was possible thanks to the previous dialogue with local stakeholders; the applied bottom-up approach was facilitated by the use of participatory techniques that involved researchers and fishermen in an exchange of needs (https://www.pesceinrete.com/2019/04/15/local-ecological-knowledge-ovvero-i-ricercatori-a-lezione-dai-pescatori/).

The sampling of the communities was carried out along a fishing pressure gradient, considered as a proxy for habitat fragmentation, in order to assess the resulting biodiversity along the different levels of fishing pressure.

The by-catch fraction, benthic organisms accidentally caught by commercial nets, and the effects of trawling on their functioning (functional traits), and the ability to survive to fishing pressure disturbance (resilience) were all measured in situ and simulated in mesocosm. In mesocosm, the effects of multiple stressors have been also evaluated by simulating climate change drivers such as temperature increase and anoxia.

The data analysis phase is underway at the Ecology Laboratory (UNIPA PP1) and will provide an important piece of information to be integrated with data from ISPRA colleagues (PP2). This combined information will allows us to apply an innovative ecosystem-based approach (Ecosystem Based Approach) for the study areas as promoted by HARMONY.

Posidonia oceanica (L.) Delile (Habitat 1120) is a marine phanerogam endemic to the Mediterranean, and is present along most Mediterranean coasts, being found in shallow waters to a depth of about 30-35 meters, and sometimes even in depths of over 40 meters in clear waters. P. oceanica represents a physical and trophic support for many animal and algal species and its meadows are one of the most productive coastal ecosystems of the world. The biological characteristics and dynamics of this seagrass (slow growth rate, slow recovery from external pressures) mean that P. oceanica meadows represent one of the most threatened coastal ecosystems in the world. Meadow regression, due to natural or anthropogenic impacts, can cause biodiversity loss, alteration of coastal sedimentary balance and increased erosion with consequent destabilisation of the coastal zone. Monitoring in Italian SIC was carried out in September 2019 in two stations inside the SIC and in four stations located outside the SIC (two on each side). Sampling and in situ measurements on P. oceanica, sampling of fauna associated to leaves (by hand-towed net) and to rhizomes (by air-lift sampler) and visual census of fish species and of Pinna nobilis were carried out at about 15 m depth.. In order to assess environmental status of the habitat, water and sediments were also sampled. To study the trophic web in P. oceanica habitat macrophytes and macrozoobenthos were sampled using quadrats and a grab, respectively, and marine vertebrates have been caught by trammel nets. Finally, the bathymetric position and the typology of the lower limit were investigated.

In the area of Sciacca (IT040012), in situ measurements showed meadows characterized by a predominantly continuous coverage on rock, matte and sand (percentage of coverage from 88% to 100%), except at one station inside the SIC and at one just outside (on the right side) where the meadows were discontinuous (coverage of 20% and 50% respectively). All meadows were pure with absence of allochthonous algae and with density values ranging from 290 to 330 shoots m-2. The lower limit was located at about 20 m depth. In the area of Portopalo di Capo Passero (IT090028) the meadows showed predominantly continuous coverage on sand, rock and matte with covering values between 78% and 100%, except at one station outside (on the left side) the SIC where meadow was discontinuous (coverage of 55%). The values of density ranged from 430 to 600 shoots m-2. Caulerpa taxifolia var. disticophilla was observed at the two stations inside the SIC and at one external station. The lower limit was placed between 25 and 30 m depth.

During the survey, no Pinna nobilis individual was found, ( alive nor dead), in either investigated sites. Regarding the visual censuses of the fish fauna the most abundant species observed were: Chromis chromis, Spicara sp., Spondyliosoma cantharus, Mullus surmuletus, Boops boop, Atherina sp. and Sarpa salpa. Laboratory analyses are in progress

For the Maltese Islands, P. oceanica metrics were measured at Ramla l-Ħamra and within the Comino Channel (area between the small island of Comino and L-Aħrax Point in Malta). These sites were chosen because there are very few human activities in the vicinity. 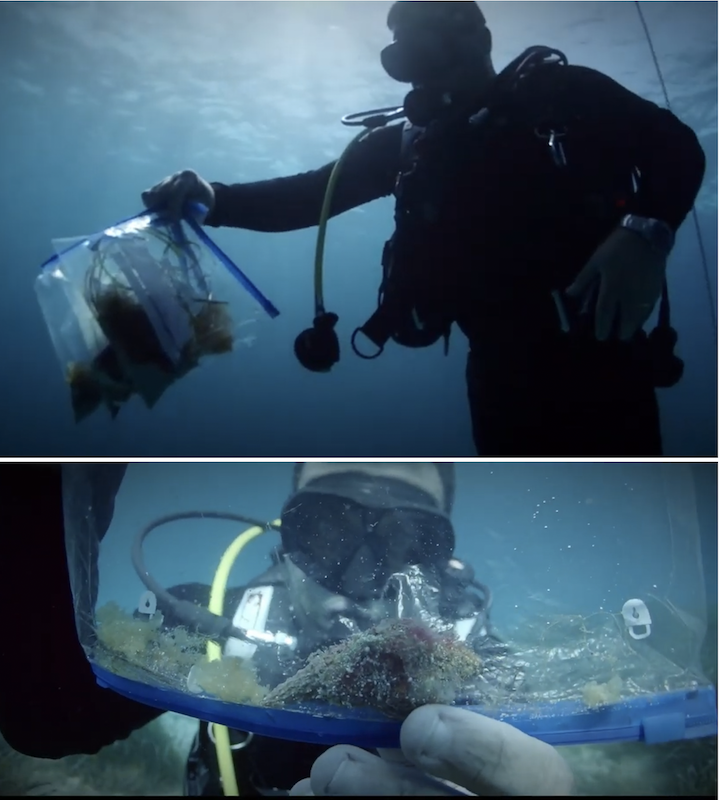 The biogenic reefs var. a Dendropoma petraeum (Habitat 1170), are bio-structures self-produced by the gastropod mollusc Dendropoma petraeum, which thanks to its ability to secrete mineral substance gives high rigidity to the construction. The structures host a large amount of associated biodiversity (both fishes and benthic organisms) so as to be recognized the main Mediterranean reef. The role of this habitat is crucial in providing different ecosystem services linked to the functioning of the gastropod itself, such as the ability to to clean and purify the water column, and the ability to protect the coasts from erosion. 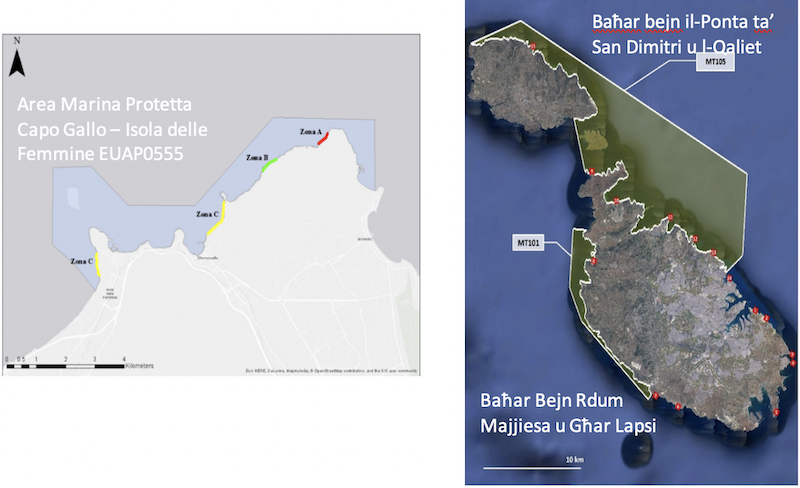 In Italy, this peculiar and precious habitat has been monitored in two areas: from 18 March to 1 April 2019 at EUAP0555 - Capo Gallo Marine Protected Area - Isola delle Femmine and on 21 May 2019 at ITA030042 - Peloritani Mountains, Dorsale Curcuraci, Antennamare and marine area Strait of Messina (SPA).

During the monitoring activities, the length and extent of the platform was measured and the GPS points were collected at the sampling sites along transects in order to highlight the biodiversity patterns associated with habitat fragmentation. The benthic community was sampled by scraping on squares of known size (20 x 20 cm) and both animal and plant components were thus sampled. 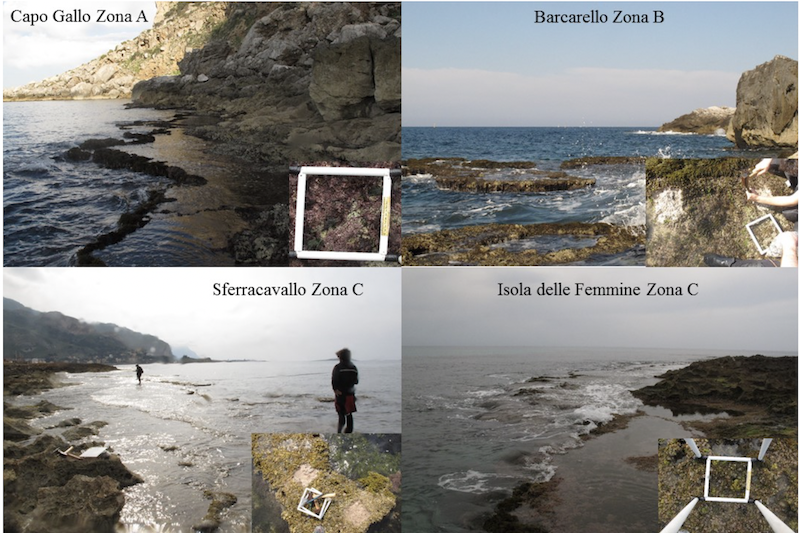 Direct manual monitoring was integrated with indirect photographic sampling of the squares which allowed us to estimate the coverage percentage of the main structuring species, the algal species and the Dendropoma petreaum species, and which will be completed with a visual survey by drone next spring! The identification data of the communities are being analysed at the Laboratory of Ecology (UNIPA PP1).

In Malta in order to fill the knowledge gaps on Dendropoma petraeum distribution, sampling sites extended beyond the confines of MT 105 and MT 101. 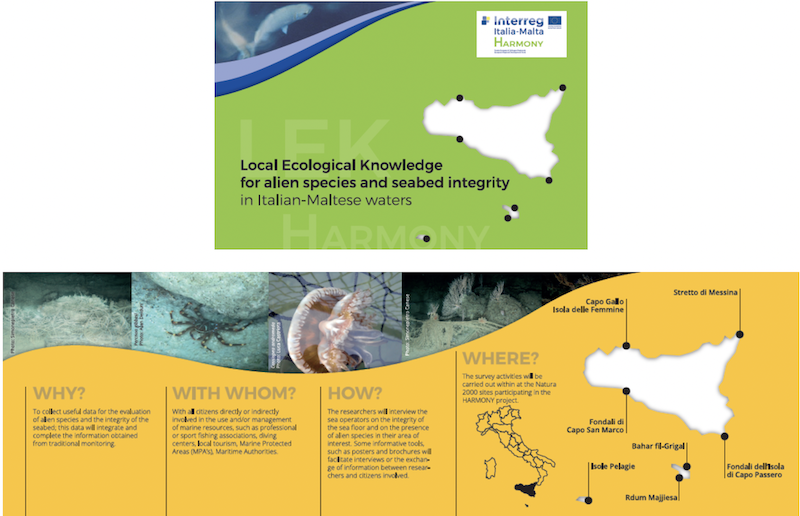 The conservation of the marine environment is a crucial target, but it also an ambitious one. Effective conservation can only be achieved if local citizen communities are called upon to contribute by actively participating in the acquisition of environmental knowledge. For this purpose, project HARMONY is actively involving citizens in the collection of environmental data and information in order to study and monitoring marine habitats and species, through the use of participatory survey tools. Local Ecological Knowledge (LEK) is being applied as a specific research methodology. This involves the collection of evidence and observations of ecological phenomena by the local fishing and diving communities, thus utilising the knowledge of those who live in close contact with the environment for analytical purposes. These non-scientific sea operators are being interviewed on their observations of sea floor integrity and the presence of non-indigenous species in their area(s) of interest. Informative tools, such as posters and brochures, are being used to facilitate interviews and the exchange of information between the researchers and the citizens involved. To date, LEK interviews have been carried out with fishermen and SCUBA divers who make use of the Maltese and Sicilian Marine Protected Areas (MPAs) participating in the HARMONY project (Il-Baħar fil-Grigal and Bejn Rdum Majjiesa u Ras ir-Raħeb. For Malta– AMP Isole Pelagie, AMP Capo Gallo- Isola delle Femmine, Fondali di Capo San Marco, Fondali dell’Isola di Capo Passero, Stretto di Messina for Italy) 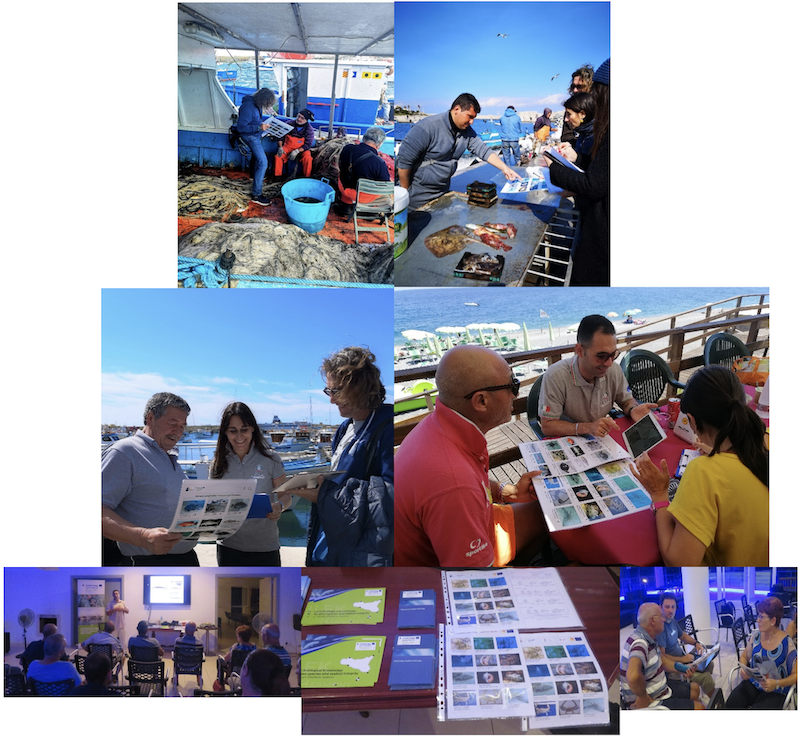